How to Get Ahead in Pistol Shooting - The UK Governing Bodies, Squads and Pathways

Pistol shooters, especially young shooters and their parents, often ask me how they can progress their shooting careers and get access to regional or national squads. It’s a fair question – there are a plethora of acronyms, squads and Governing Bodies out there and for someone who doesn’t know the lay of the land it can be very confusing. I’ve put together this short guide in the hope it might help. Please let me know any omissions or corrections.

If you have any questions about this information then please contact me. 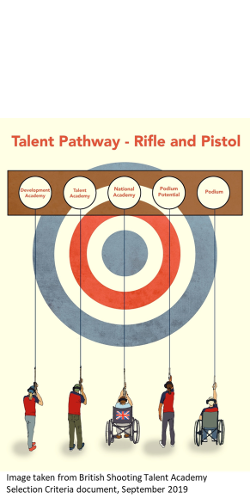 British Shooting is the NGB for all forms of ISSF target shooting in the UK and as such is the only route for athletes to get to the major competitions such as World Cups, European & World Championships and the Olympic Games.

To represent Great Britain &/or be selected for squad membership/funding, you need to meet the published criteria. The selection policies were updated recently (02/10/2019) and can be found here:

There are different levels of support and funding for GB athletes, the details of which are all on the British Shooting website. The initial step to getting on British Shooting’s radar is to put in a score that qualifies you for the ranking list (known as Entry Level Scores -ELS). The current ranking list can be seen here. The necessary scores for 10m Air Pistol are detailed below (with thanks to David Levene of the British Pistol Club who tracks and collates these scores):

British Shooting have just announced a new category for Juniors under the age of 18. The Entry Level Scores for this category in 10m Air Pistol are below:

If you shoot one of these scores at a nominated meeting (see the British Shooting Rifle & Pistol Selection Policy listed here for details of nominated meetings) then David is likely to pick it up and add you to the ranking list. If not, then contact me and I will pass it on.

Rapid Fire Pistol, Standard Pistol and 25m Pistol are exceptions due to the nature of the Section 5 Firearms Licensing. If this is your discipline, please contact me separately for further information.

If you want to shoot at the Commonwealth Games (but not at Birmingham 2022) then the route is through the Home Country Governing Bodies, as athletes at the Games represent their home country, not Great Britain.

The ESSU run the England Academy and Team England National Squad. Both have selection policies and qualifying scores, which can be found on the website, as well as regular training weekends for squad members. The ESSU often sends squads to minor internationals such as Intershoot, RIAC and others.

Scotland and Wales also have their own squads and funding pathways, more information on which can be found on their respective websites.

The BPC was set up for the best pistol shooters in Great Britain to support them with their shooting careers. They run monthly competitions at the Lord Roberts Centre which are attended by Members and Non-Members alike and these meetings are a friendly and welcoming introduction to shoulder-to-shoulder ISSF competition as well as an opportunity for experienced athletes to compete against each other. The BPC do not operate as a traditional club, not having a clubhouse for example, but they are a tremendous resource for pistol shooters and membership (if you qualify) is highly recommended. For more information see the BPC website.

The NSRA operate the Lord Roberts Centre, the largest 10m and 50m range in the country with a range of 10m, 25m and 50m targetry, much of it electronic. They also run the majority of club and postal competitions such as the NSRA/Eley Postal Competition and Final, The British Open Air Championships and others. Membership of the NSRA gives shooters access to insurance for their equipment and liability insurance whilst shooting and the NSRA website has a useful Club Finder service.

For pistol shooters there are 2 NSRA squads, one for Seniors and one for Juniors. For more information on these please contact me.

If you are just starting out on your pistol shooting journey, then the best place to start is with your local club. These can be hard to find but both the NSRA and British Shooting have Club Finders. Your local club should have instructors, pistols you can borrow and a welcoming atmosphere.